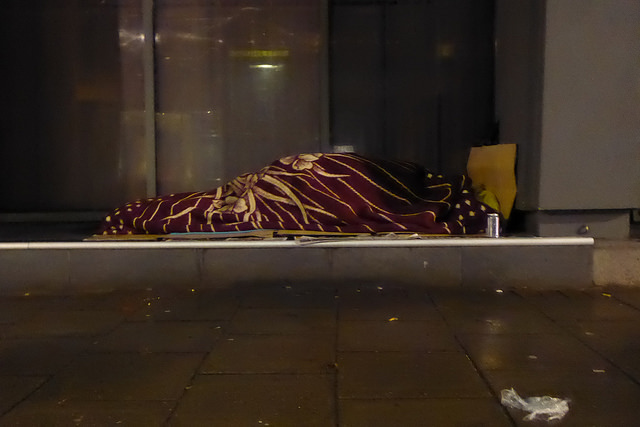 We estimate that there were at least 40 people sleeping rough on the streets in our neighbourhood on a typical night during the autumn of 2016.

We base this estimate (which we consider a minimum figure) on a combination of several street counts, and sightings of rough sleepers observed during early morning deliveries of our community newspaper Fitzrovia News during November and December 2016, and January 2017. These were informal street counts carried out by volunteers between 5am and 7am on weekdays.

The neighbourhood of Fitzrovia straddles two London local authority areas: City of Westminster and the London Borough of Camden. We estimate that there were at least 25 people sleeping rough on the Camden side, and at least 15 people on the Westminster side. The area is about 100 hectares (or one square kilometre) with about 60 percent of the area being in Camden.

Today the Department for Communities and Local Government released it statistics for rough sleeping in England. These statistics give a snapshot of the number of rough sleepers on a “typical night” in the autumn of 2016.

Westminster City Council stated that its rough sleeper count is 260.

Camden Council stated that its rough sleeper estimate is 17.