Fitzrovia Neighbourhood Association’s women’s art group will join other community organisations this summer in putting on a display of community pop art at the British Museum. 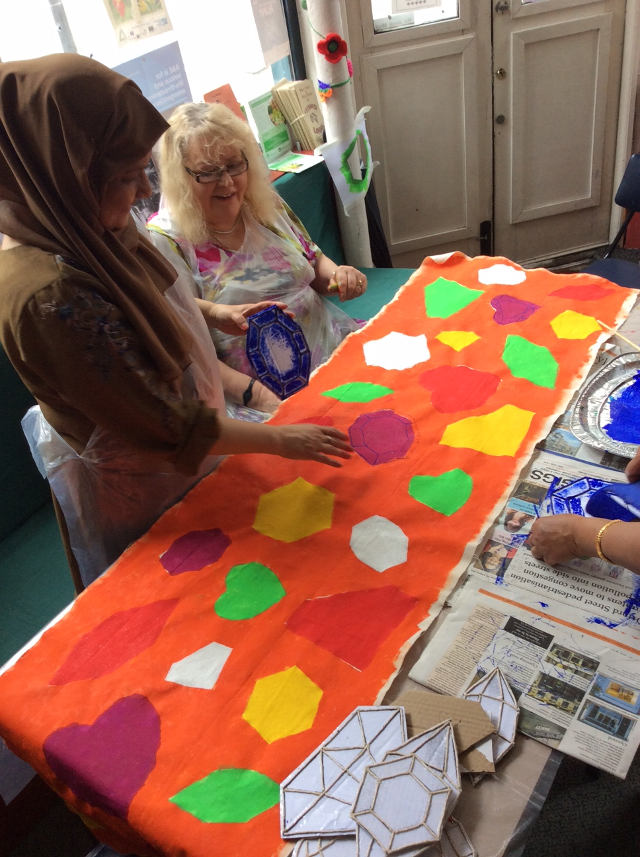 Fitzrovia women working on the panel for the partnership art project at the Fitzrovia Neighbourhood Centre.

The Fitzrovia women used our Neighbourhood Centre in Tottenham Street to create a textile panel for London Pop, a collaborative art installation and a response to American Dream: pop to the Present, a major exhibition which has been on show at the British Museum since March.

Looking at the art of some of the most celebrated American pop artists the project, created by adults from 12 community groups across Central London, has explored themes of consumerism, identity, urban environment and food through a variety of art techniques, including textiles, weaving, collage, printmaking, applique and digital imagery.

Some of the community groups have taken a playful approach in the way they express their ideas and designs, while others have been able to draw upon patterns from within their own culture and translate it into the notion of contemporary pop art.

In common for all the groups involved has been the opportunity of using pop art as the basis for a platform to discuss and voice current affairs, media and other issues.

London Pop will be displayed from 6 June 2017 for two weeks in the Great Court at the British Museum, Great Russell Street, London WC1B 3DG.

Neighbourhood news, features and comment.
View all posts by Editors →
This entry was posted in Culture and tagged art. Bookmark the permalink.
%d bloggers like this: