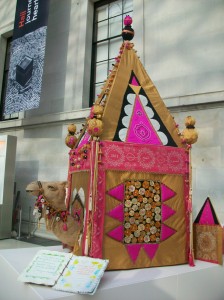 Mahmals have been used for centuries leading caravans on the Hajj pilgrimage to Mecca.

Bangladeshi women from our community development project are proud to once again contribute to an exhibition at the British Museum. Led by the Mary Ward Centre, college for adult education, the Fitzrovia Neighbourhood Association took part along with other organisations in making the textile panels for the Mahmal and pages for the Mahmal book.

The exhibition deliberately coincided with the current Hajj exhibition at the British Museum. The Mahmal is an artefact which has been used for centuries leading the caravans on the Hajj pilgrimage to Mecca. The Mahmals were highly decorated and featured gold, pearls and precious stones.

Historically the Mahmal carried the holy Quran and the covering of the “Kaaba” given by the Sultan and inspired people in history making the journey to Mecca.

Men, women and children from community centres and schools designed and assembled the Mahmal using traditional techniques but with the addition of contemporary design to create a modern reworking of the artefact. They were joined in this creation by a group from the British Museum.

The exhibition continues until 15 April 2012. More details about the Hajj Exhibition from the British Museum.

This site uses Akismet to reduce spam. Learn how your comment data is processed.